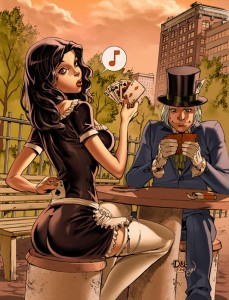 Once I’m in deep conversation with a woman, I generally don’t use pre-scripted material.

I like to just go with the flow and really get to know her.

But at some point, if I’m getting to know her well, I like to turn the conversation sexual.

Turning the conversation sexual is one of the most important things you can do with women.

While she may be attracted to you already, talking explicitly about sex brings up the idea of sex in her mind.

Talking about sex triggers sexual feelings in her as she visualizes situations that she’s talking about.

One way to get from deep rapport to sexual talk is to tell a story. I have a story I tell about my parents almost catching me and my first girlfriend having sex in the basement of our house.

It’s good because it transitions from something very rapport-based (my parents) to something very sexual (having sex with my girlfriend in a strange place).

Another way I like to go from rapport to sexual topics is to play the Questions Game.

I’m not too fond of rapport games like Strawberry Fields or the Cube. It just feels too canned in my mind. When I’m in rapport with her, I usually like to vibe.

Not gonna say the Cube doesn’t work for people, but that canned stuff just turns me off.

But I do really like to play the Questions Game. It just seems less canned, more fun, and you can really get to know someone.

And most importantly, it allows the possibility to get very sexual.

You go back and forth asking questions.

Normally what I do is start off very non-sexual. I ask questions like… 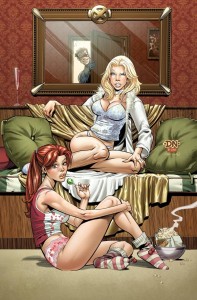 When you were a kid, what did you want to be when you grew up?

If everyone here looked exactly like you, how would you stand out?

What’s the nicest thing you ever did for a guy you were dating?

And then after a while, you can start to make it really sexual.

What turns you on in a guy?

What kind of underwear are you wearing?

This Â¡Ã†game’ is a lot of fun and really allows you to get to know each other pretty well. It also gets very sexual fast.

Technically you could just ask her these questions out of the blue, but the game of being able to ask any question that she won’t ask back makes it more likely that they’ll be uninhibited in asking questions.

While you can use this game any time, I most recommend this after you’ve been talking to her for a while. You’ve had some conversation and you’re ready to get deeper.

I use this a lot on a first date, maybe after one drink or so.