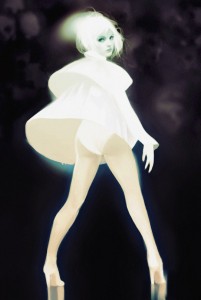 “I’m craving sushi,” she texts me. “Any interest in getting some for dinner?”

“Who am I to stand between a woman and her sushi cravings,” I respond. “I’ve made that mistake before and I won’t make it again.”

I’ve been seeing this girl for a while, so things are fun and relaxed. We make plans to meet at 6:30 for sushi in my neighborhood.

I get there at 6:30. She hasn’t arrived. She’s probably delayed on the train, I think to myself.

I turn around and walk out of the sushi restaurant.

Instead of waiting patiently for her, I go shopping.

A few doors down, there’s a store I was eyeing. I text her that she can find me there.

Ten minutes later, as I’m trying on clothes, I get a text from her. “I’m getting off the train now,” she writes.

Eventually she walks into the store 15 minutes late, apologizing. I pull her into me and give her a kiss.

Instead of walking right out of the store with her, I look at a few more items of clothing and then head out with her.

It might be a small thing for me to go shopping instead of waiting around for her in the restaurant.

If I had wanted to wait for her in the restaurant, I could have. I could have busted on her and said, “You’re late. Drop down and give me twenty push-ups.”

But the fact that I went and did my own thing, makes her feel even more comfortable.

If she were to walk into the restaurant and see me waiting there for her for 15 minutes, it makes her feel bad. She feels guilty. 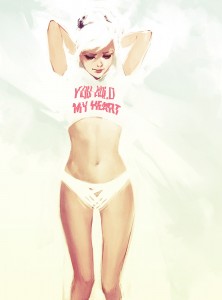 So instead, I occupy my time and do my own thing. Her knowing that I am out shopping instead of waiting for her makes her worry less about me.

I don’t want her to worry about me in that way. It’s too much pressure on her.

Whenever I’m with her, I want to make her feel like I’m doing something I want to do, and she is coming along with me.

If I want to go out one night somewhere fun, I tell her that I want to do it and ask if she wants to join me. I always put myself first.

By letting her know that you were planning to do it alone anyway, you are taking the pressure off her.

Women do this too. Look at this girl’s initial text to me. She talks about her feelings first before inviting me out. “I’m craving sushi,” she says.

I was recently reading Borges again. In the Book of Sand, Jorge Luis Borges writes,

Ulrikke invited me to share her table. She told me she liked to go out walking alone.

I remembered an old quip of Schopenhauer’s.

She wants to feel like you’re doing your thing, and she’s there with you.

This doesn’t mean that you never care about her feelings or try to understand her, but your default state is that you are doing your own thing and if she wants to be with you, she can.