Breaking the Grip of Fear

This video (safe for work) is probably one of the scariest things I’ve ever seen. Fresh out of one of my nightmares.

It shows what it’s like to climb to the top of a 1700 foot tower–with no safety lines.

If you had the opportunity, would you climb the 1700 foot tower in the video? Some of you would do it because have balls the size of Texas (or are extremely stupid). But most of you probably would not do it.

That’s your fear acting in a good way.

It’s same fear is trying to keep you alive when you go to talk to women. It’s a remnant of your primal brain telling you to stay alive.

If tried to climb this tower, your fear would actually make it more dangerous.

Let’s say you were climbing the exact same ladder, but it only goes 10 feet off the ground. Chances are you wouldn’t be too hurt if you fell and you almost definitely wouldn’t die.

You’re not too scared.

But put that same ladder thousands of feet in the air, like in this video, and all of a sudden something else is going on in your body. 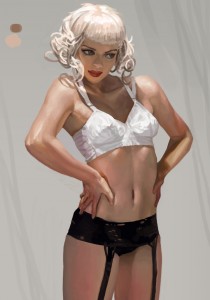 Your blood runs cold. You may feel light-headed or get vertigo. Your muscles become stiff.

Your fear makes it more likely that you will fall and die.

Fear is a signal that alerts you when there’s danger. It’s an alarm that tells you when the house is on fire. But in this case, the alarm itself seems to burn the house down.

How can this be beneficial?

The answer is that it is beneficial. While the fear certainly does keep you from performing optimally, your fear would likely keep you from climbing that high in the first place.

Your fear keeps you from stepping out onto that ledge at all.

It’s called inhibition, and it serves a variety of purposes.

When in a dangerous situation, animals experience fight, flight or tonic immobility.

If a mouse is caught by a cat and knows it has no way out (flight), it certainly can’t fight.

So it “plays” dead. It actually becomes paralyzed. It’s called tonic immobility. It’s a paralysis that overtakes the body.

This serves a purpose. As a predator, cats are inclined to kill living things for food rather than eat things that are already dead because it’s not fresh. So there’s more of a chance that it will leave the mouse alone.

Human beings go through the same thing when they experience fear.

Human beings are extremely social creatures. We live in groups. None of us would survive very long out in the wilderness on our own. We’ve evolved and adapted behaviors to function in groups.

Inhibition becomes extremely important when we’re looking at social animals. In order to function optimally as social animals, the group needs to stay together through internal conflict.

So what happens when there’s a conflict between individuals within the group?

Fight must be minimized. If animals were always fighting to the death within groups, that would be a problem. 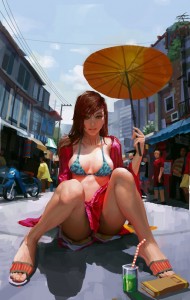 And in order to stay together as a group, flight must be minimized. If a member left the group every time there was a problem, it wouldn’t be long before the group was dispersed.

Therefore, internal inhibition is one of the most important social behaviors in keeping groups together through conflict.

Humans have evolved a very elaborate disinclination to take action that may jeopardize their standing within the community.

Everyone has experienced this. You want to go to talk to a girl, but you feel this invisible force paralyzing you.

Or maybe there’s a large group of people joking and talking and you want to speak up, but a fear grips you and you just can’t do it.

There are a lot of behaviors that define the leader, the alpha male, the confident guy. He speaks loudly. He takes up space. He is comfortable as the center of attention.

Most guys, all their lives, they live practice giving in to their inhibition. They have learned to live their lives with a submissive strategy. And it leaks out to every other aspect of their behavior.

Luckily this can be changed.

With practice, just as these men learn to climb the ladder without fear by doing it every day, you can also teach your body that there’s nothing to be afraid of.

As you practice each day climbing to slightly higher heights, eventually your body becomes comfortable going higher and higher.