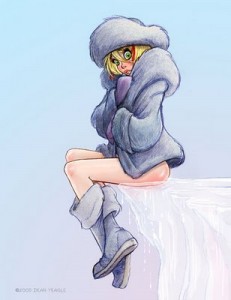 “Okay, so I used banter and playfulness to get the girl,” guys ask me, “but at what point can I just relax and let my guard down?”

Look at it this way, when can you stop being a man around women and just be submissive and sexless? Never.

Once you get used to it, maintaining the sexual tension in relationships is actually quite easy and fun?as long as you set it up that way from the start.

Much of relationship management is about not slipping into nice guy mode and instead always remaining a challenge. And a lot of this is done by being fun and playful.

Here are eight ways to maintain that fun, playful tension in relationships.

How much of an asshole can I be? The running joke is that I’m an asshole. I’m not really an asshole, I just play one around women.

She says she’s sore from working out. I respond, “You know, if you want, you can come over and give me a massage. I’m a nice guy like that.”

Her birthday is coming up and I ask her, “What are you getting me for your birthday?”

Whenever she says anything self-deprecating, I rarely disagree with her. This is important because things can easily slide into her fishing for compliments.

“Do I look fat in these jeans” is the classic Catch-22. But this never occurs if you let her take responsibility for her own self-esteem.

If she says something like, “I’m not that pretty.” I won’t respond with, “I think you’re pretty.”

Instead I would say something like, “Why don’t you think you’re pretty?” or “What don’t you like about yourself?”

Whenever she does something stupid, I relentlessly bust on her. A girl I’m seeing borrowed a drill from me to drill into concrete walls. She texted me that it wasn’t working.

Two hours later, she confessed that she had the drill going backwards.

I relentlessly busted on her. She laughed and punched me in the arm as I later told her how it was my new favorite story and that I had already told five different people.

She hated it and loved it at the same time.

When things go too far, I don’t jump in and apologize. In busting on her, sometimes I go too far.

If she gets a bit mad, I don’t apologize. I usually just stop doing it or just change the topic.

If anything, I’ll say, “I’m just playing.” But that’s pretty rare. The thing is, I don’t let her make me feel bad if I was just playing around.

Fuck chivalry, I take the lead. I rarely hold the door open for a woman. Why? If I did, she would be walking into the place first.

Nope. I’m the man, I enter first. Who knows what’s in there? I am always the one leading.

Whenever we’re walking through a place, I grab her hand and lead.

I blame her for EVERYTHING. Even if I obviously do something wrong, I blame her.

I recently took a girl to an event. When we got there, I realized that the event was actually next week.

“I blame you,” I said to her. “You’re really distracting.”

It’s obvious to her that I’m joking. We’re both laughing.

But the underlying communication is that I’m not going to feel bad for fucking things up. If I can joke about it, it means it doesn’t bother me.

If I do something stupid, I’ll try to make fun of her. If that fails, I’ll make fun of myself.

I’m laughing and saying “Touche. Okay you winÂ¡Ã„ just this once.”

To quote Will Ferrel in Megamind, “Okay you’re right and I’m less right.”

Sexualize everything. Sex is always the first thing on the table.

I used to be overly nice with women in the past. I would try to make it very clear to her that firstly, I cared about her as a friend.

If a girl I was seeing came over, I would try to get into a deep discussion before we have sex.

Now if a girl comes over, sex is the first thing on the table (if I want it).

Am I her friend? I’m friendly with her. We connect. We respect and support each other.

But first and foremost, we’re lovers. And I don’t let her forget that.

She is a sex object.* She’s a whore. She’s my whore, there to do with as I please. And the things we do are unspeakably dirty.

Of course, you better believe that afterward I’ll blame her for seducing me and being so dirty.

And she loves it.

*Note: I’m referring to dirty talk and role playing within a mutually established relationship. See this and this comment for more.