What to Do When Her Body Says No 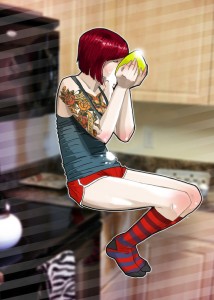 She’s into me, I can tell. It’s sexual as hell and we’ve been connecting like crazy.

But something is off now.

Her arms are folded and she’s turned away. Her legs are crossed but in the opposite direction, away from me.

Whenever a girl does this, it’s imperative what you do next.

Call her out on it.

“Man, you have such closed body language,” I say to her as I mimic with my body exactly what she’s doing.

“Sorry!!!” she says. Immediately she turns and faces me 100%. Her knees are practically pointing toward me out from under the short skirt she’s wearing.

She stares into my eyes with puppy dog eyes.

If you let something like bad body language go on too long, she’ll convince herself emotionally that she’s not into you.

However, if you call it out, it’s a show of dominance and social perceptiveness.

For more on Calling it Out, check out When In Doubt, Call It Out.