What NOT to Do on a First Date

I really like this video because it shows exactly what happens on a date when a tall, good-looking, pro athlete tries to get away with being too nice.

I’m warning you, it’s painful to watch. But there is so much juicy stuff in here, I couldn’t help break down exactly what went wrong.

From then on, his body language is TERRIBLE. He can’t stand still.? He’s pacing back and forth the whole time. Notice him do this whenever he’s standing throughout the video.

When you talk to women, you want to stay planted with as little movement as possible.

Whoever moves the least has the highest value. Think of the way a parent is still while children are jumping around.

It’s like he’s getting a Christmas present and is about to open it. A guy this big should not be facing the girl directly like this unless he’s about to make out with her.

1:20. A few seconds later he shifts his body as they get ready to leave. This is how he should have been facing her when he first met her. Perfect form here, by accident, for one moment. She’s facing him, he’s facing away.

1:23. Boom, next moment, she takes the lead through the bar. Bad. He’s following her. This is what I’m talking about when I say chivalry is bad.

You take the lead.

Start off with something more interesting than that. This is the most boring, predictable question in the world.

Or better yet, let her start asking the questions instead of seeking rapport yourself.

But his hands are fidgeting and weird. That’s bad.

In this situation, he would have done well to put his left arm around the seat and sit back in comfort, taking up even more space.

This is the death knell of the nice guy: his compulsion to confess. He must confess to his niceness.

There is nothing else he can do. It’s all he knows when it comes to women. And he wears it on his sleeve.

But there’s a time and a place to show that off. And if you do it, you need to do it in a manly way.

Here, he should have busted on her and turned the tables.

Something like, “You bartend in a strip club? Huh. I would have thought you work in a library.” 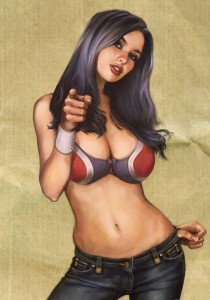 Okay, not that bad.

But then he can’t help but again CONFESS his nice guy ways. The way he confesses to his non-drinking, he falls into her frame.

He may as well have said, “You’re probably not going to like this, but I don’t drink.”

What he should be doing at this point is QUALIFYING HER, flipping the script.

There is a difference between the two of them. She’s a drinker and he’s not.

Well, is it cooler to be a drinker or a non-drinker?

You want to frame this so that you’re judging her for her drinking rather than her judging you for your non-drinking.

Think about the negatives of drinking and ask her about it in a pleasant way.

“How do you find time to work out when you drink so much?”

“You’re not one of those girls who’s only hobby is to drink, are you?”

The fact of the matter is that highlighting your differences at this point can only lead nowhere.

We can all say that Tim Sylvia is a stand up guy and tells the truth, but the truth is, he wanted to fuck this girl, despite their differences in drinking.

You saw it at the end.? But his niceness gets the best of him. He confesses.

This wouldn’t have been so bad if he hadn’t CONFESSED at the beginning of the show that he doesn’t like drinking.

Now it seems like he’s compromising his principles for a woman he barely knows. Really unattractive.

Whenever a woman commands you to do something, your first instinct should be to say No.

Even if you want to do it.

This is true for the first ten seconds of meeting her all the way to when you are in a committed relationship. Nothing good can come of it.

When she does this, you MUST throw it back in her face.

“Wow, you’re telling me what to do already. Awesome, you’re like my mom.”

5:32. Here he’s gazing at her for an extended period of time while she looks forward.

If you’re looking at the girl for any extended period of time while she’s looking away, then there’s a problem.

Eye contact communicates attraction. By doing this he’s saying he’s okay with her not being attracted to him.

It demonstrates that he’s trying to win her approval.

He’s also communicating that he’s looking to her for the next move.

The good part about this right here is that his body is facing forward and not turned into her.? At least he has that right.

This is probably the worst part about this date. If you don’t take anything away from this article, take this away:

NEVER, EVER ask a girl where you are with things or if she likes you.

There’s one way you need to find out this information:

Sexually escalate with her.

Any other way and you may as well be asking her “So what don’t you like about me?”

Believe me, she’ll think up things on the spot.

6:11. She tells him that she’s not sexually attracted to him and adds that it’s not a bad thing.

He says “That’s not a bad thing?” incredulously.

This is the FIRST time he’s disagreed with her all night.

This is the FIRST time he’s shown any balls.

But he’s only doing it because now he knows for sure it’s a hopeless cause. 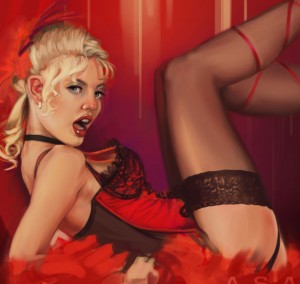 He’s the pouty nice-guy who didn’t get what he wanted because he’s such a great guy. He’s probably walking away thinking “Well, I’m still a great guy.”

Look at this moment that comes after he disagrees with her.

It’s the first REAL moment on the date. He’s actually saying what he’s thinking and feeling instead of being nice up to his ears.

A little too late.

Obviously some stuff was cut out here, but I’m guessing he pressed her as to why it wasn’t working out and so she spills the beans:

She’s not attracted to this 6’8″, good-looking MMA fighter because he is too nice.

This isn’t because she’s a lush or because this particular woman happens to like bad boys. It’s a fact of evolution:

Women aren’t attracted to men for their niceness.

7:03. He walks her to the door and stands there like a fool.

Mind you, this is after she’s been going on and on telling him what she doesn’t like about him.

Have you no pride at all, Tim?

You walk her to the door, even though she’s already told you, “I find you hideous.”

And then you stand there like an idiot, hoping she’ll all-of-a-sudden change her mind and invite you in.

He has no clue how bad he’s been rejected or what to do about it. He just keeps limping along, displaying his lack of aptitude.

God bless you, Tim Sylvia. You seem like a great guy. I’d love to have a beer with you.

But you’ve just displayed, very aptly, what being a nice guy gets you with women.