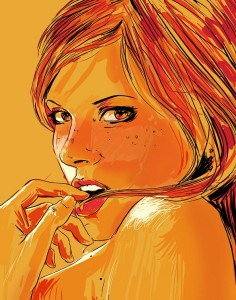 While all of them are different people, their confidence about who they are effects those around them.

People react differently to them.

I recently had a conversation with a very attractive 29-year-old friend of mine. She talked to me about attraction and her charismatic friend who’s great with women.

I have a friend who’s below average in the looks department.

He’s got a huge red-haired Irish afro and is pasty and white and short and probably could drink less beer and work out more. I’m being honest. He would agree with me!

But he has no qualms about how he looks. He’s 100% confident about who he is.

He’s so confident about how he looks, it isn’t even something you think about. He’ll wear plaid suits into bars and still everyone wants to talk to him. He doesn’t care.

He has amazing posture. It’s very look-at-me posture, like I’m not afraid of you looking at me.

At no point does he ever apologize with his body. He’s wide open. He puts his hands out in the air all the time. I don’t think I’ve ever seen him cross his arms in his entire life. He’s just incredibly confident with his body.

The way he interacts with people is incredible. He’s really good at picking on people in a way that makes them want to talk to him more.

And I think that’s the biggest thing that makes him hot. He’s not afraid. He doesn’t care.

One time, we were in this really bad neighborhood. He parked his car and bumped the car behind us and the car in front of us.

There were all these thugs on the corner. And they were like “You just hit my car.” 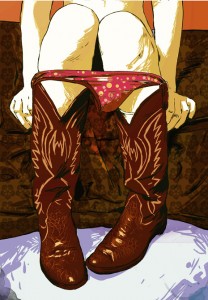 I was thinking, oh god, we’re going to get shot.

And he yells “That’s what bumpers are for!”

And they’re all like “Heh heh heh, that’s funny! You wanna hang out!”

We dated for a while. It was really cool. As much as he’s a big baller in the bar and can keep things light and fun, he isn’t afraid of having a serious conversation. A lot of guys are scared of their emotions.

If he felt a way about something, he would let you know, even if it were something that was upsetting to him. Things that someone would say ‘That’s not attractive,’ he didn’t worry about those things.

He could be incredibly sincere without trying to be sincere. The people who were his friends were like ‘That’s the guy to go to.’

And he’s great with women. He’s a real ladies man. All the girls love him. They’re all about it.

We were in an elevator and he started talking to this woman with a baby. At first she was nervous. But by the time we got to the ground floor she was holding the elevator to keep talking to him.

He just really enjoys talking to people. He just likes learning things about strangers. He’s actually interested in people, and because of that they’re like ‘cool!’ and flattered and talk to him.