Her First Instinct is to say "No" 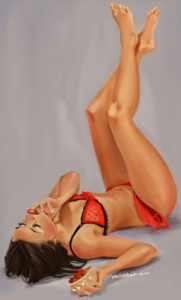 In our attempt to minimize emotional pain and discomfort, often times we as men are too ready to abandon an interaction with a woman.

We do this assuming that sheÃ¢â‚¬â„¢s not interested because she hasnÃ¢â‚¬â„¢t taken initiative or opened up yet.

But I see it over and over again in coaching sessions: a guy will start talking to a woman and sheÃ¢â‚¬â„¢s smiling, interested and welcoming, but he doesnÃ¢â‚¬â„¢t see it.

In a recent conversation with a gorgeous woman IÃ¢â‚¬â„¢m dating named Beth, we got to talking about our high school crushes.

Beth tells me the story of RJ Wilson, her high school crush.

She was sitting on the carpeted floor in her living, watching Jeopardy on TV with her father. The phone rings.

Upstairs in the kitchen, her younger brother answers it. Ã¢â‚¬Å“Beth, itÃ¢â‚¬â„¢s RJ!Ã¢â‚¬Â he yells down to her.

RJ had recently transferred to BethÃ¢â‚¬â„¢s school from Notre Dame, a catholic school.

She sat behind him in Spanish class. Their Spanish teacher, Mr. Swinson, called RJ Ã¢â‚¬Å“Bob,Ã¢â‚¬Â although everyone else referred to him as RJ.

Mr. Swinson had given a homework assignment to work on in pairs, and had paired RJ and Beth to work together on it.

RJ was calling about the homework assignment, but he also had other plans.Ã‚Â  He liked Beth and planned to ask her out. 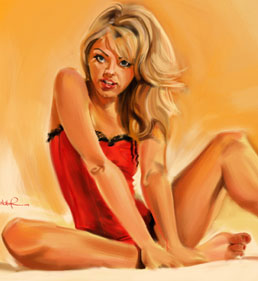 Beth herself had been harboring a secret crush on RJ for two weeks now. He was fun, played lacrosse and always said Hi to her with a smile when she got to class.

As she picked up the phone, she glanced at her father sitting on the sofa a few feet away from her. Her feelings for RJ coupled with the presence of her father started to make her a little nervous.

They talked a bit, although her responses were clipped as Alex Trebek prattled on announcing answers to Jeopardy questions.

Finally, he asked her if she wanted to go out with him.

The next word that came out of her mouth was loud, clear, unequivocal, and impetuous:

Ã¢â‚¬Å“I liked him, that was the worst part!Ã¢â‚¬Â she explains. Ã¢â‚¬Å“I felt horrible after I hung up. I thought about it an awful lot. I was just nervous with my father there, so my first instinct was to just say no.Ã¢â‚¬Â

For the next four years she tried to win his interest back without any luck. Even as they graduated and she asked him to sign his yearbook, he wrote, Ã¢â‚¬Å“Ã¢â‚¬Å“I forgive you for not going out with me four years ago.Ã¢â‚¬Â

While Beth admits that she doesnÃ¢â‚¬â„¢t often say No to guys now if she really does like them, this is a great example of how women often decline initiatives from men for so many different reasons.

Social anxiety tends to make us read the negative signals women are giving off.Ã‚Â  A hesitation or a lack of initiative on her part makes us think that she really doesnÃ¢â‚¬â„¢t like us at all.

WeÃ¢â‚¬â„¢ll start an interaction and not see the kind of interest weÃ¢â‚¬â„¢d like and so we walk away, when in actuality, she was just unsure rather than turned off. 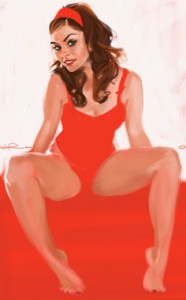 Or she wasnÃ¢â‚¬â„¢t comfortable enough with the stranger sheÃ¢â‚¬â„¢s just met.

Or she’s just used to saying, “No.” Beautiful women get approached enough that this usually their first instinct.

Anxiety can make us feel like everyone else is socially more adept than ourselves–particularly attractive women.

We expect that if she liked us, she would take things to the next level.

In actuality, she may simply not know how.

Ã¢â‚¬Å“Have you ever been in a situation where you had to ask a guy out?Ã¢â‚¬Â I ask her.

SheÃ¢â‚¬â„¢s not saying this in a cocky way. SheÃ¢â‚¬â„¢s a gorgeous woman. Guys take initiative with her all the time.

Besides, the fact that they can take initiative with her is part of the charm of the men she likes.

Next time you begin talking to a woman, instead of leaving right away at the first sign of disinterest, try to hang out for a little while.

A huge part of confidence is not crumbling at the first sign of trouble.

When you do hang in there for a bit, you just may be surprised at what develops.