Approach Anxiety is Part of Something Larger 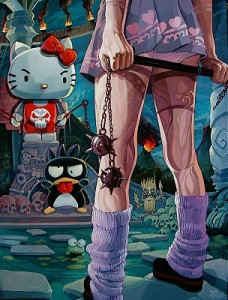 A raw, visceral fear that has nothing to do with any logic.

There was just something preventing me from walking up to a woman I didn’t know and talking to her.

I hated it. It didn’t make any sense.

But this inhibition was part of something larger, something that bothered me as much as the fact that I couldn’t walk up to a beautiful woman and talk toher.

There were times when I’d meet a great woman through a friend or some other social circle.

And it was always the same story.

Kelly was a struggling actress. Her short, bob haircut fit well with her teasing personality.

“Will you marry me?” she said. Everyone at the table was giggling.

I had just arrived to meet up with my friend Alessandra and some of her friends. They were all sitting around a table drinking in a bar on the lower east side of Manhattan.

It was one of those places that’s a coffee shop during the day and a bar at night. The wall behind them was lined with books.

“Yes, or no, will you marry me?”she said to me, holding a plastic ring from the container of her drink.

She put the ‘ring’ on my finger and someone said “I now pronounce you man and wife.” Everyone laughed.

This girl is really cute! I thought to myself.

I said my hellos to Alessandra and made sure I got introduced to everyone, including Kelly.

Kelly leapt up from the table and walked over to the bar to get another drink.

This is my chance, I thought to myself. But it was more than a chance to talk to a girl alone. The entire night was also my chance.

I knew if I didn’t take advantage of this, another opportunity may not present itself for a very long time.

I walked up to the bar and stood next to her as she ordered a drink. “So how do you know Alessandra?” I said to her. We got into a small conversation.

At the end of the night, I managed to ask her for her phone number. She busted on me a bit, but gave it to me.

The following weeks were a whirlwind for me. I thought about her. All the time.

Would I get this amazing woman in my life? How would I do it?

I called her. A lot.

The time spent waiting for her to return phone calls was excruciating.

I would be walking down the street and I’d whip out my phone at regular intervals to see if she’d called.

I didn’t care if anybody else called. All the phone numbers in my phone book were worthless compared to hers.

I could flip through numbers of every woman I knew, even attractive women, but flipping by her name made my heart jump.

I managed to go out on a few dates with Kelly. We even had a few great conversations on the phone. 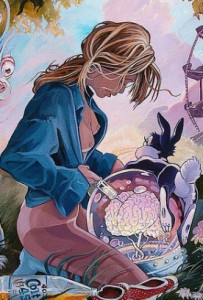 I’d read some advice about dating. I knew, for example, that I had to share with her things that I was passionate about.

But soon things fell apart. I could tell that I wasn’t “getting” her and that I never had.

I knew she wasn’t feeling it. It tore me apart.

It wasn’t even that much of a romance. Almost everything happened in my head.

I thought about her way too much. I wanted this so bad. I would do anything.

I would pray to the heavens above, even though I didn’t believe in God.

I would count the number of steps I took on the way home and if the number was right, she would surely call soon.

And when it fell apart, I felt depressed.

It opened up every hole inside of me and showed me exactly where my shortcomings were.

It wasn’t the first time this happened. Other women had come into my life and left me like hurricane-ravaged coastal town.

I can name the women.

Robin, who I met through writing circles, would talk about Argentinean literature with a passion.

All of a sudden Casares and Cortazar carried meaning for me far beyond what any interest in literature should allow.

Kendra, a girl I met in college, was into rave and clubbing. The “scene” all of a sudden was new and exciting and there was nothing like it on earth.

I would fail with these women.

These situations would burn a hole into my psyche, leaving me rattled for weeks, months or even years. I would get too close, and too intense.

My world was on fire.

And the worst part about it was the way I behaved. Whenever I came in contact with a very attractive woman, something happened to me.

If I were with my friends, I could be this cool, funny guy. My friends liked me.

But put me around a beautiful woman and all of a sudden I was paralyzed.

And it wasn’t cute, like John Cusack movies from the 80s where he stumbles over himself and talks to the girl with charming perplexity.

It was complete and total paralysis.

If I didn’t have the looks or the money or the social connections, that was one thing. And that totally sucked.

But the way I acted around these women was unacceptable. I wasn’t myself. I wanted so badly for it to work out that I just locked up.

It was the same fear, the same paralysis I felt when I was motivated to talk to a woman I saw on the street, only on a much deeper level.

Walking around the Lower East Side of Manhattan, I wanted all those amazingly sexy women I saw on the street.

God I wanted them. 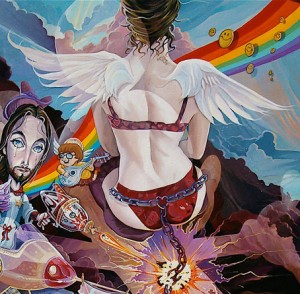 But the worst was when I actually did come close enough to one of those women.

She may not even have been flawlessly beautiful. But she turned my life upside-down.

As I learned to approach women I didn’t know, a lot of things began to change for me.

Being able to walk up to women I didn’t know and start a conversation didn’t automatically solve all my relationship problems.

But it laid the foundation.

Part of it was that I had more opportunities with women. Now I was able to go out almost any day of the week and meet a new woman.

That made me less needy when I did meet a woman I really liked.

Part of it is that I was more aware of how my actions would affect the women I was seeing.

I knew when I was smothering the flame and when to back off.

But the most important part is that by facing my own fears, I learned how to deal with my emotions.

It’s not that I can turn feelings on and off. I can’t. And I wouldn’t want to.

It’s that I’m not a slave to my feelings. If I do start to feel paralysis, I still have a plan in my head.

I know what to do.

When she asks in that playful tone if I’ll marry her, I still feel some inhibition if I like the girl.

But that paralysis doesn’t dictate my actions as much anymore.

That fear doesn’t dictate my actions.